WE ENDED LAST WEEK IN THE BLACK

We ended last week in the black – at least in the finish room. Black has been a popular finish choice for the last couple of years. Some say it is the new neutral. They are probably right, everything goes with black.

This week we finished a couple of projects in black.

The first is a table that was commissioned to go in a hunting lodge as a base for a trophy mount. The design is fairly simple and the satin sheen black makes it a great choice for showcasing the mounted animal. The same idea would work great for showcasing any type of art. Constructed entirely from maple it features nicely turned legs and a small bead detail on the aprons. While we are proud of the piece, in this case it will disappear under the piece on display. In the photos below, the one on the right shows the leg and apron detail. 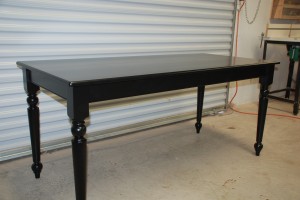 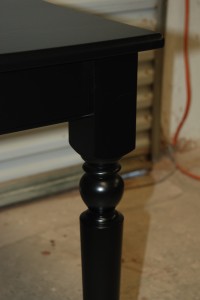 Our friends Carolyn and Jerry brought us a nice square table which they moved from their home in New Mexico. Originally made by another Texas furniture maker, it was used as a corner table with two twin beds in their mountain home. It has now been re-purposed as a small dining table for their granddaughter’s college apartment. The table is made of mahogany with a framed top and a small cove detail between the top and the aprons. At about 40″ square, it is perfect for an apartment dining area.

Our instructions were to “make the table taller”. We had to add a little over 3″ to make it dining table height. We have made a lot of tables taller, and the goal is always to make it look like nothing was done. This table was glued together very well when it was made, leaving us no options for dis-assembly. Our solution was to add to the bottom of the legs. After cutting blocks to size, we turned a tenon on the end of each. The legs were drilled and the new extensions glued on. At the joint line, we repeated the cove detail from above.

To disguise the joint, and eliminate the need to refinish, we lacquered the table base black. The black ends just under the tabletop in the cove detail. The mahogany finished top appears to float over the shadow line. You can see the cove detail under the top in the photo on the left. On the right is the detail of the leg. 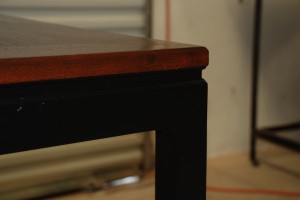 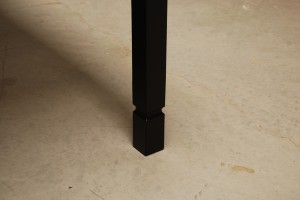 Below you can see the whole table. After traveling from Texas to New Mexico and back to Texas, it is now headed to Oklahoma for a higher education. 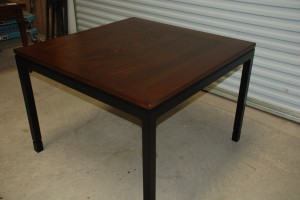